In this post I aim to walk you through the solution for each level and my thoughts behind each puzzle. Discussing things like how I came up with the puzzle and how the puzzles changed during the development process.

With the first level I wanted to teach the player the basics of the game. These being: create a path from the green key to the gold key and the towers kill the enemies. Therefore, I made the solution as simple as possible: a straight line. However, before I could make the first level, I needed to build all of the necessary systems, like the pathfinding for the enemies and targeting for the towers, this took around 20 hours (half the development time). 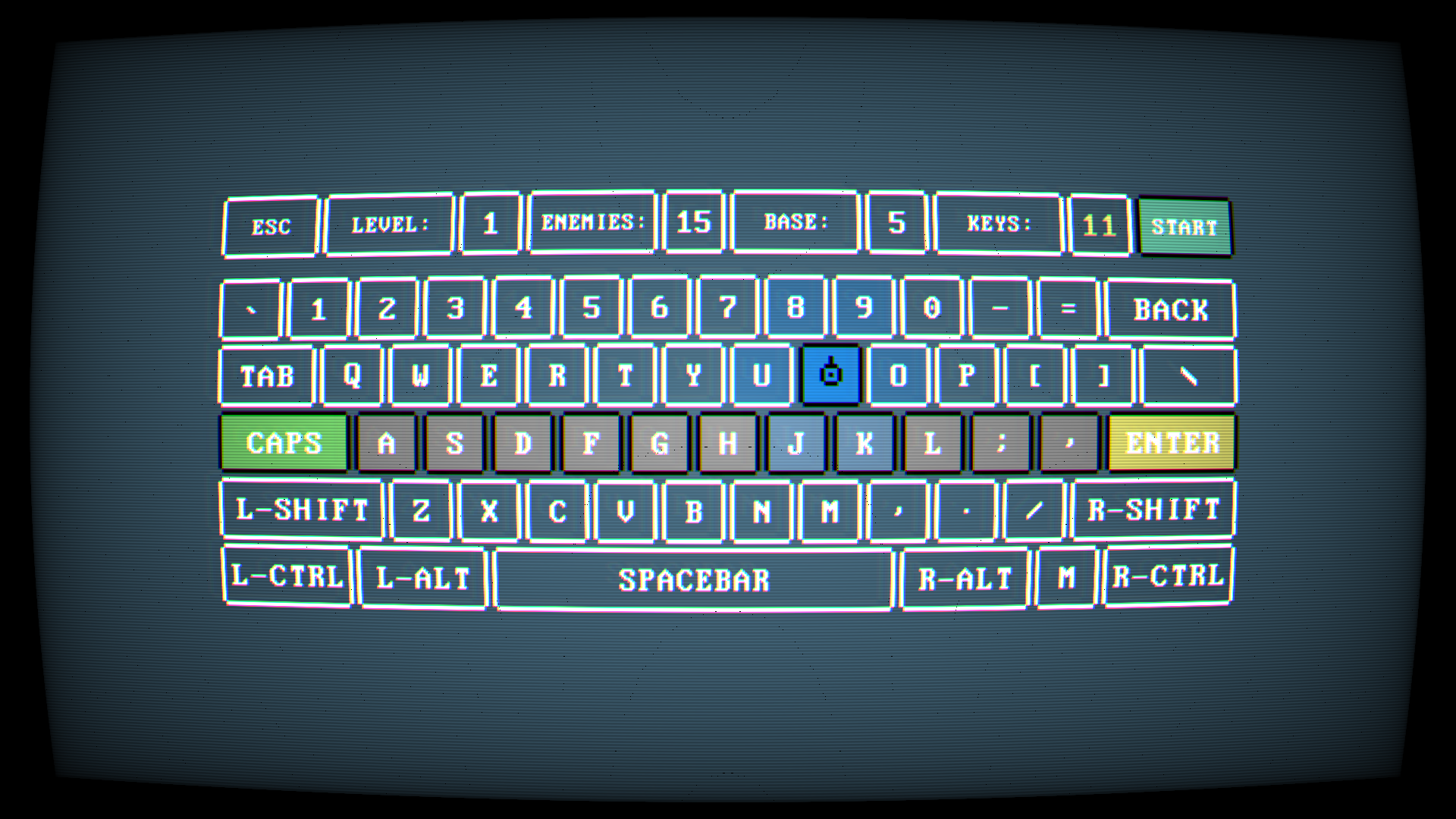 The first and second level are connected. The basics are introduced in the first level, after which the second level expands on it by removing choice. In each level I tried to create challenge by removing things, since removable doesn't require any explanation (while adding does). So in the second level the layout is the same as the first, but a couple of keys are removed. I also wanted to show that the spacebar allows you to use far less keys, which is were the trophies come in. If the player uses the minimum amount of keys necessary, they earn a trophy. As I'm writing this, I realise that the player is only made aware of the trophies in the level select screen. Perhaps it's a good idea to show at the end of each level, whether they have earned the trophy. 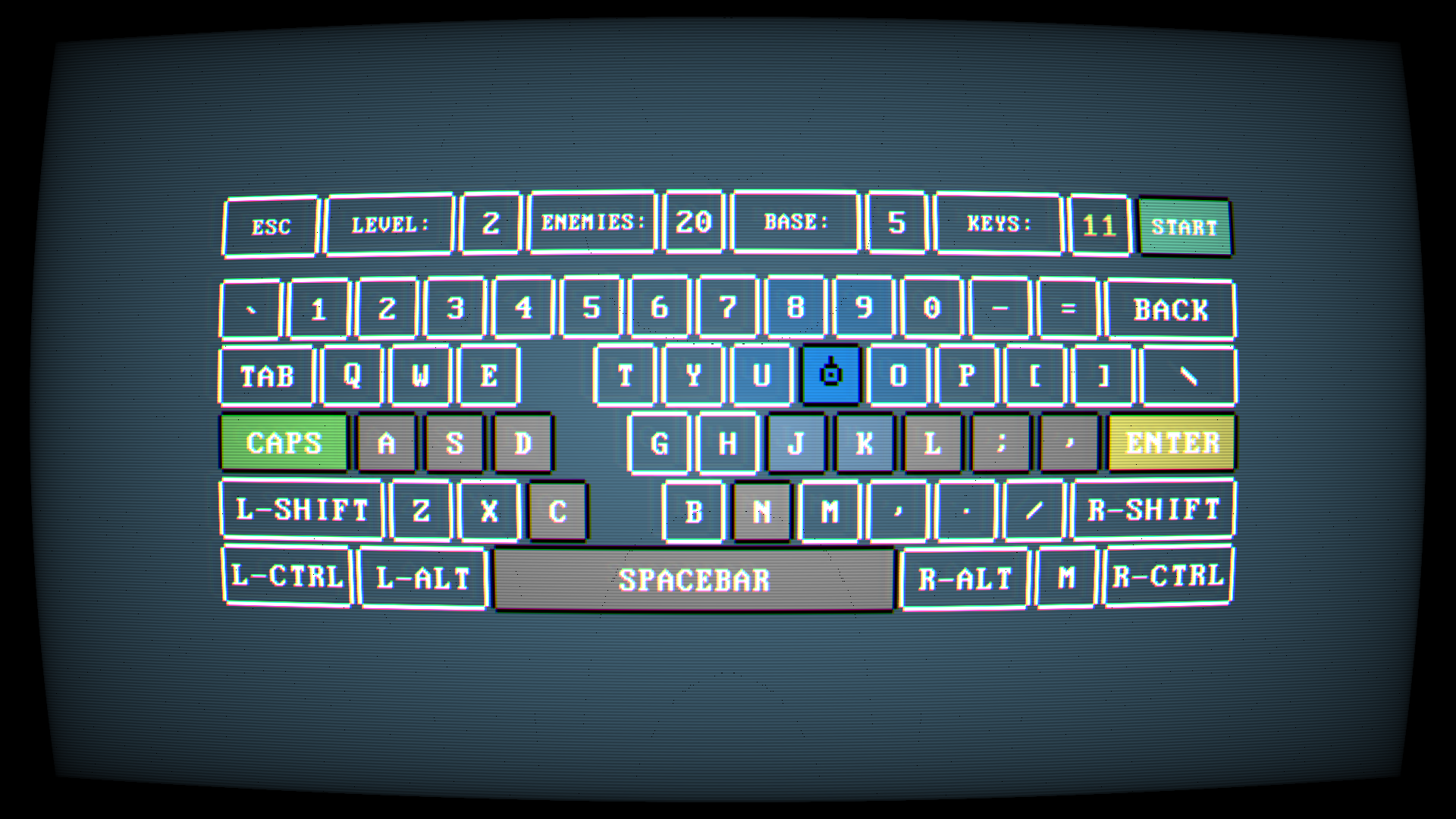 The third level introduces a new type of tower. This tower has a different maximum range, but it also has a different minimum range. I attempted to make the player aware of this, by not allowing the usage of the keys within the minimum range in this level. Also notice how there are no other towers in this level, this is so that the player can become familair with the new tower type.

The regular tower and the two barrel tower both predict the future position of the enemies based on their direction, velocity and the time it takes for the bullet to reach them. However, the system isn't optimal since it uses the current direction of the enemies. In level 3 it is possible for the enemies to get to the L key. In which case the limitations of the system are revealed, as the tower misses every chance it gets. 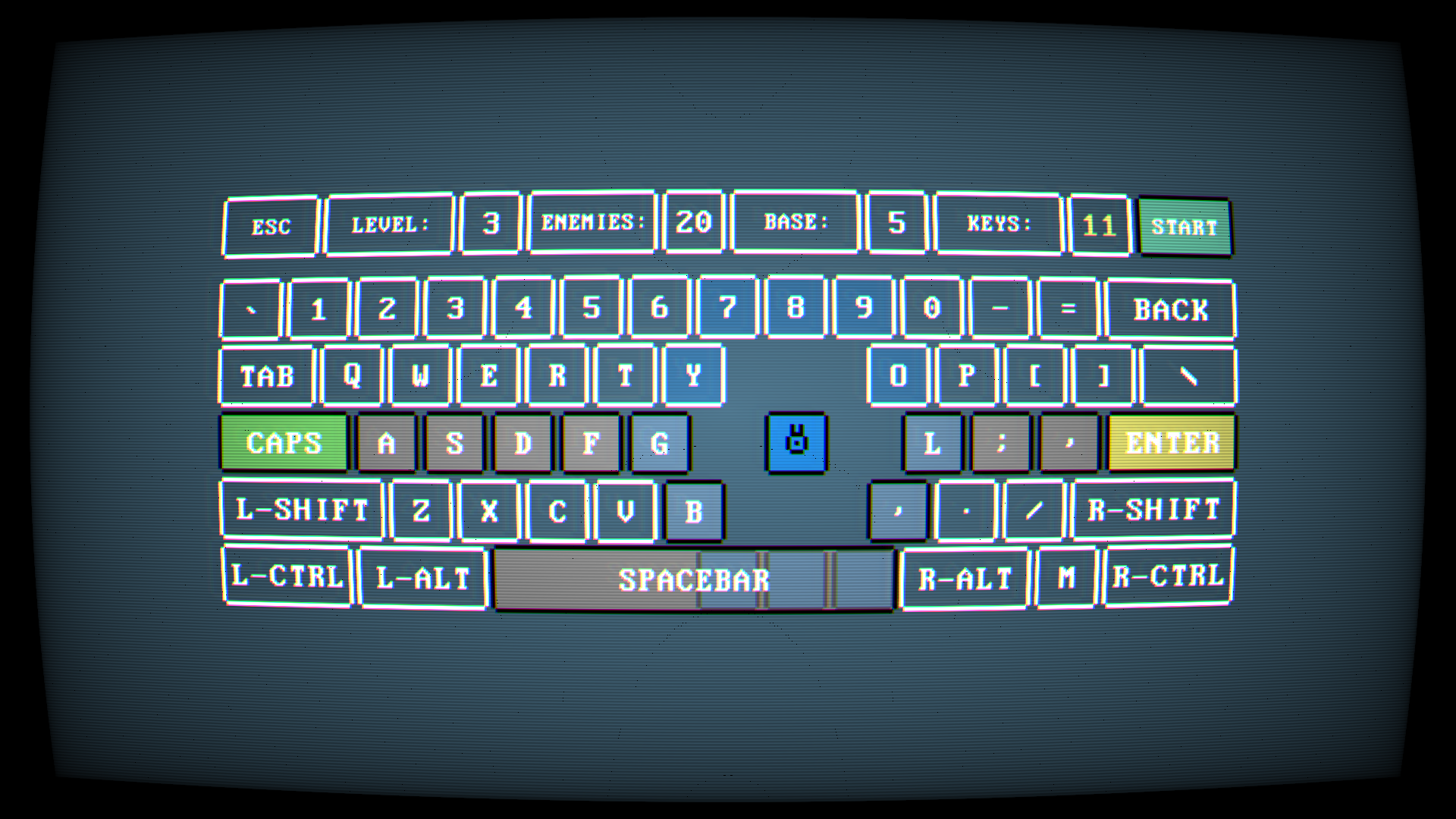 Level 4 combines the new tower with the regular tower that was introduced at the start. The goal of this level was to show the player that each tower has its own strengths and weaknesses. The regular tower turns quickly and fires pretty quick, but the tower with two barrels fires faster while turning slower. Hopefully the player the realises that they have to combine both towers in order to complete the level.

At first level 5 might seem similar to level 2. However, the spawn rate of the enemies is increased significantly. Therefore the level can only be completed if the player gives the tower more time to shoot at the enemies. This is done by creating a path that circles around the tower. I removed a number of keys, so that the player would have to move along side the removed keys, naturally creating a circular path around the tower. 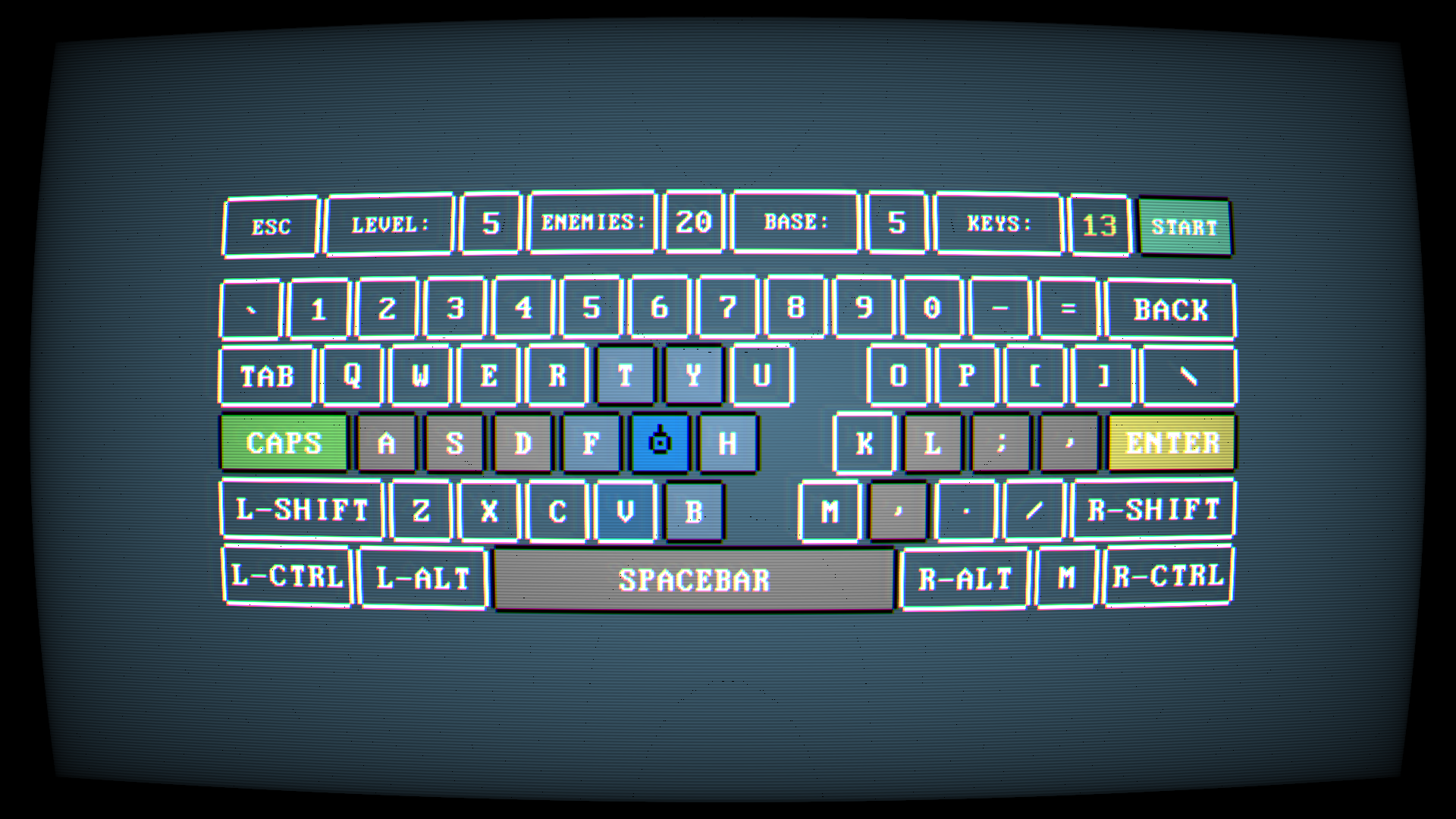 Another tower is introduced in level 6. Alongside a different type of key. These blacked out keys function as walls; enemies and bullets cannot move over them. The new type of towers shoots out bullets in a radial pattern, but it's fire rate is quite slow. This is why the player has to make optimal use of all of the bullets that the tower fires. I once again removed keys so that the player would have to create a path that goes above or below the removed keys. After the first try, they would quickly realise what the most optimal route would be. 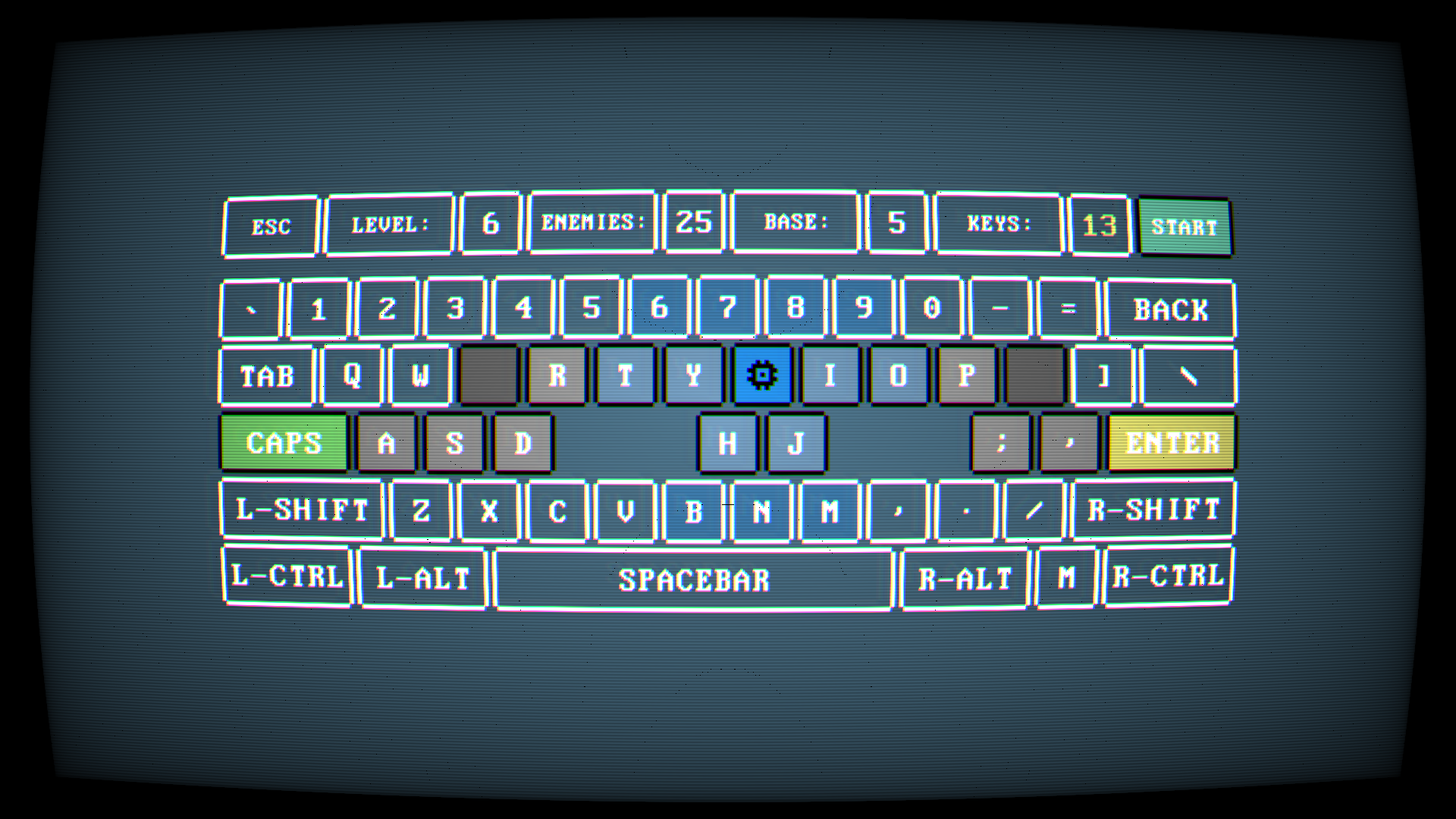 Originally level 7, 8 and 9 were level 6, 7 and 8. However, I felt that the level pictured below was too difficult for an introduction level of a new tower and key type. That's why I moved the levels backwards and created a new level 6 (discussed above). Level 7 aims to show that towers will still shoot even if there is a wall in between the detected key and the tower. It also shows that it is possible to have the towers detect enemies at one key, but then kill enemies at a different key. Which was an essential lesson for the next level. 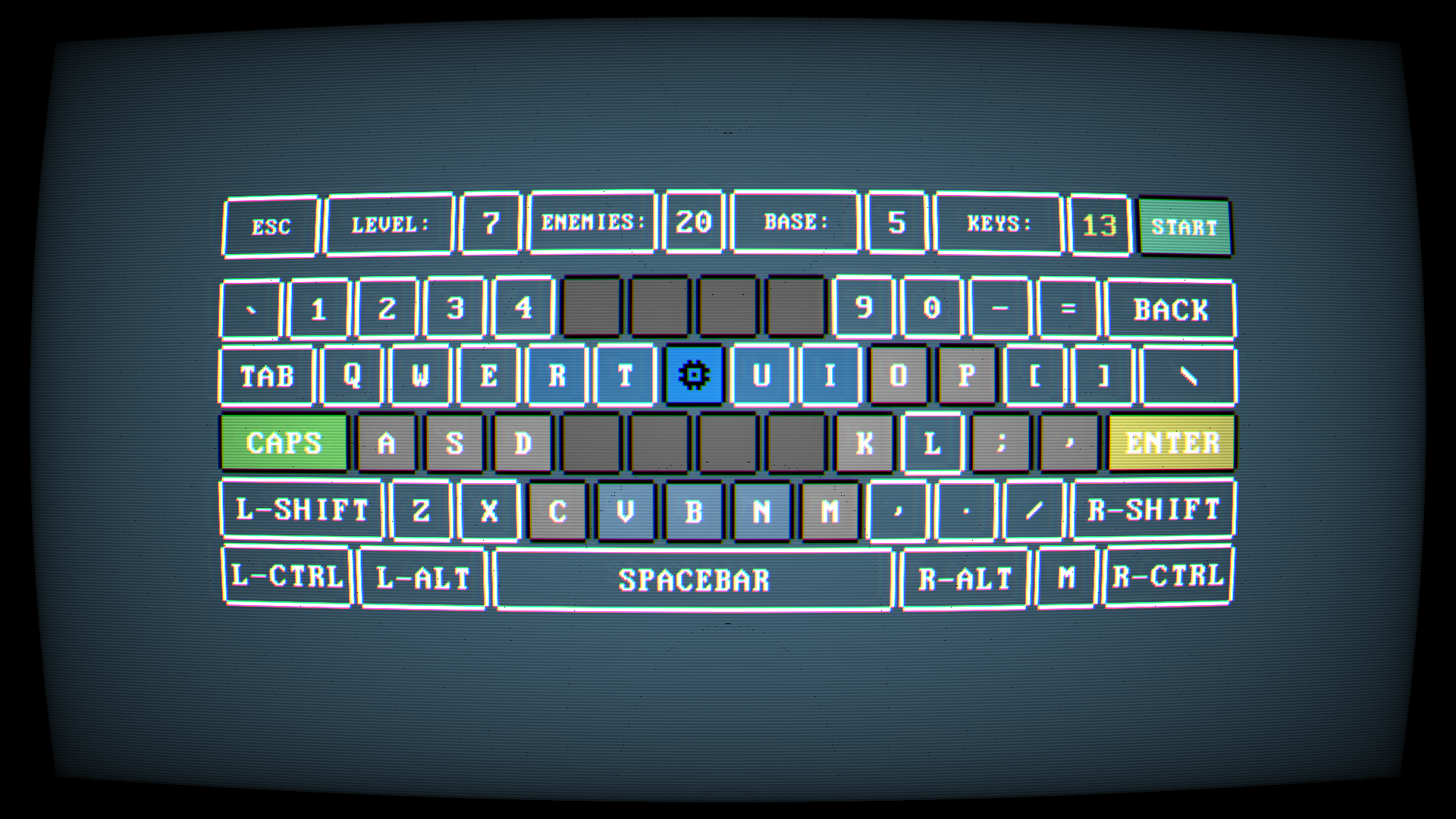 While I was making the previous level, I realised that bullets could move through the gap in between the wall keys. Rather than increasing the size of the colliders, I decided to make a level all about this gimmick. Most people that I've seen playing the game, don't realise that the pathfinding system tries to find the shortest route out of the keys they have enabled. This isn't too big of an issue in the previous levels, but can be a problem with the area at the top left of the regular tower. Therefore, I will likely disable the R and O keys in a future update. 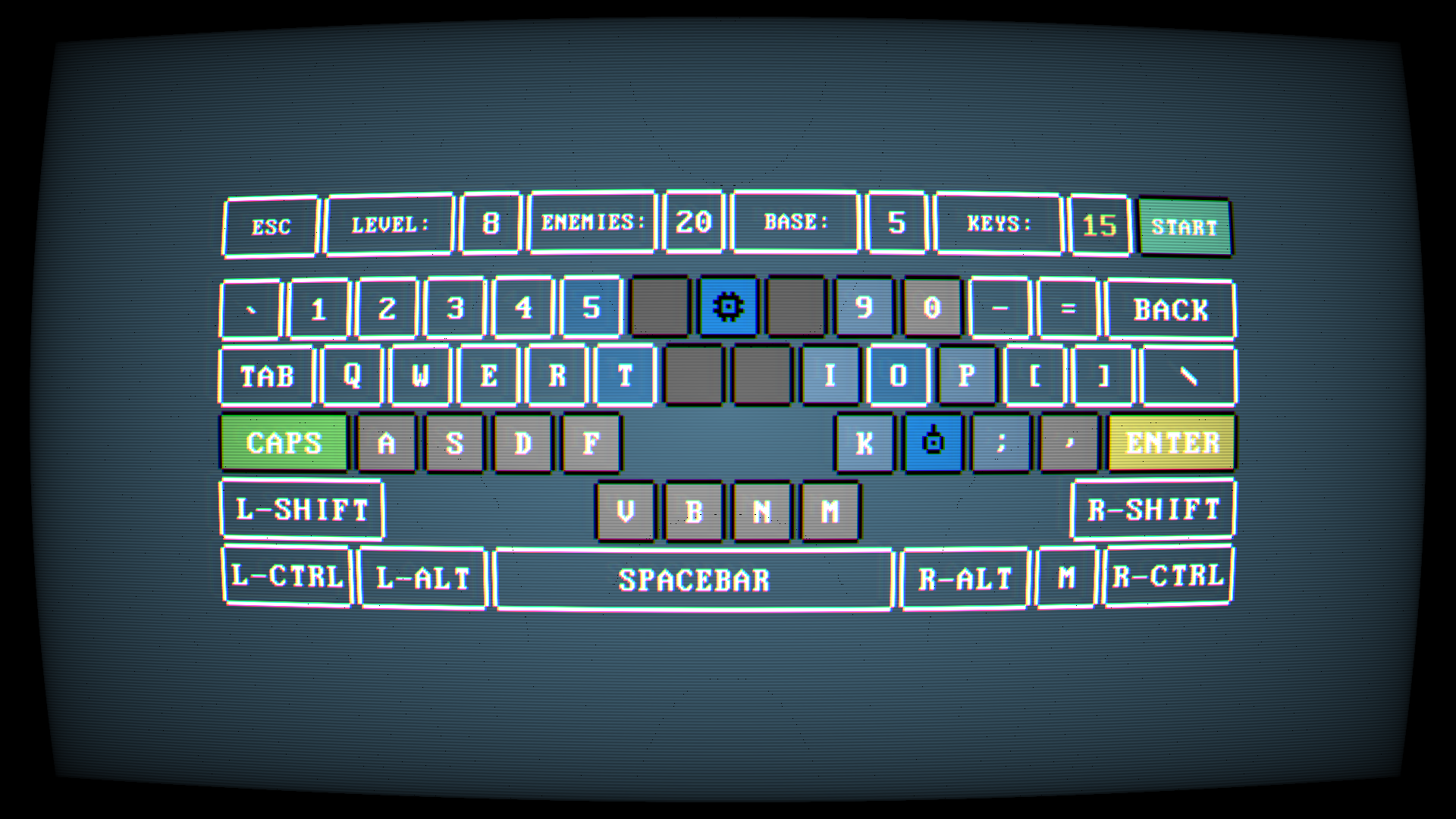 The second to last level is especially difficult as it introduce the concept of having two starting keys in a challenging environment. In this level the player needs to realise that they have to create one path that passes by both of the towers. They also need to discover that the path of one key can go over another starting key. Perhaps players realise the first thing, but this is less likely for the second. 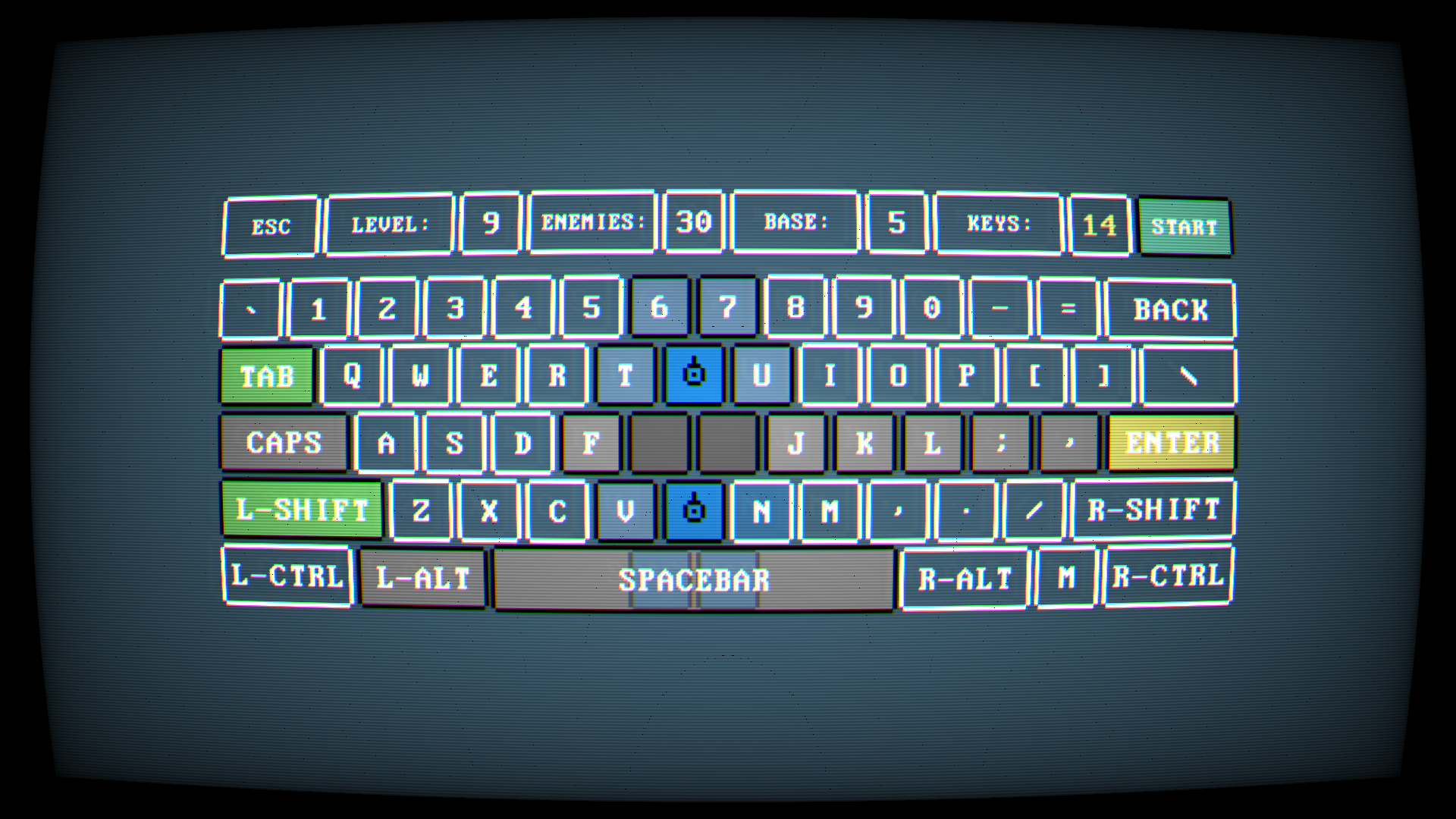 It was difficult to come up with interesting ideas for each one of the puzzles, especially for the last few levels. Which likely also contributed in my decision to create a new level 6 and move the last levels back. My original idea for the level was to have the solution be a V for victory, as it is the last  level of the game. The backlash and backspace would be ending keys and the spacebar would be the starting key. However, after I had failed to come up with an interesting, I decided to create a new type of key.

I had an idea for a key that you could toggle during the simulation, but toggling it would result in another key also toggling to its inverse (so KeyA = true and KeyB = !KeyA). Therefore, there would still be a path from the starting key to the ending key, but you could change the route. This would also solve the issue of downtime as the game is running the simulation. However, it was a bit to complex to make this the day before the deadline, which is why I stripped it down to something similar to the on/off switch from Mario.

Unfortunately the end result didn't look much like a V, but I did have a pretty interesting new key to end the game with. 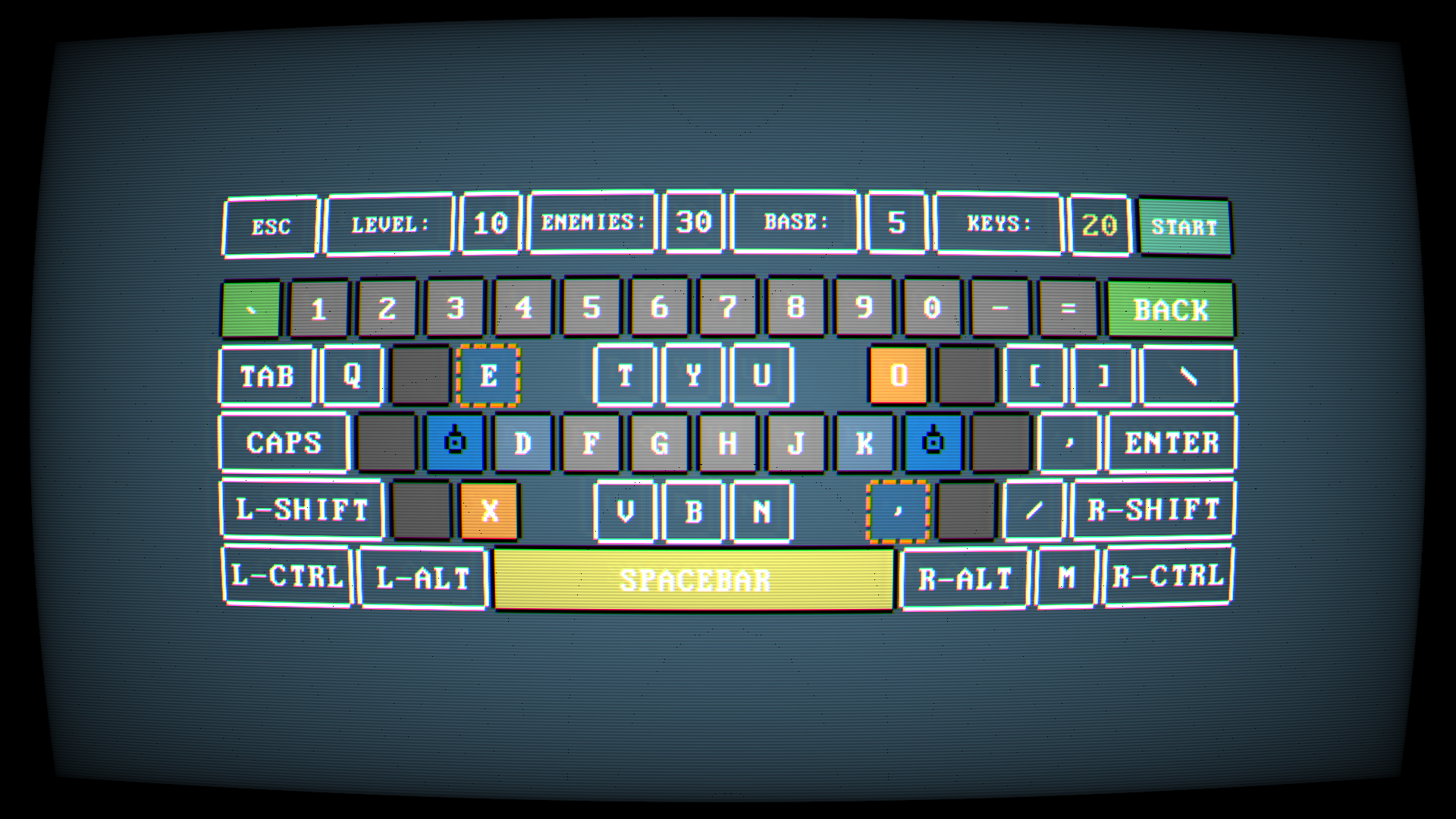 This level was added as a bonus level in the post-jam version. It can be unlocked by acquiring five or more trophies. The level is quite unique from the other levels, because it's set on the numeric keypad part of the keyboard. There's also a new type of key, namely the slime key. This key will slow down enemies that are walking over it. The player really has two options: go straight up or go up on the right. Either way, the path will only go over two of the tower range tiles. I suspect that the puzzle isn't that hard, compared to the other levels, but will be quite memorable because of its uniqueness. 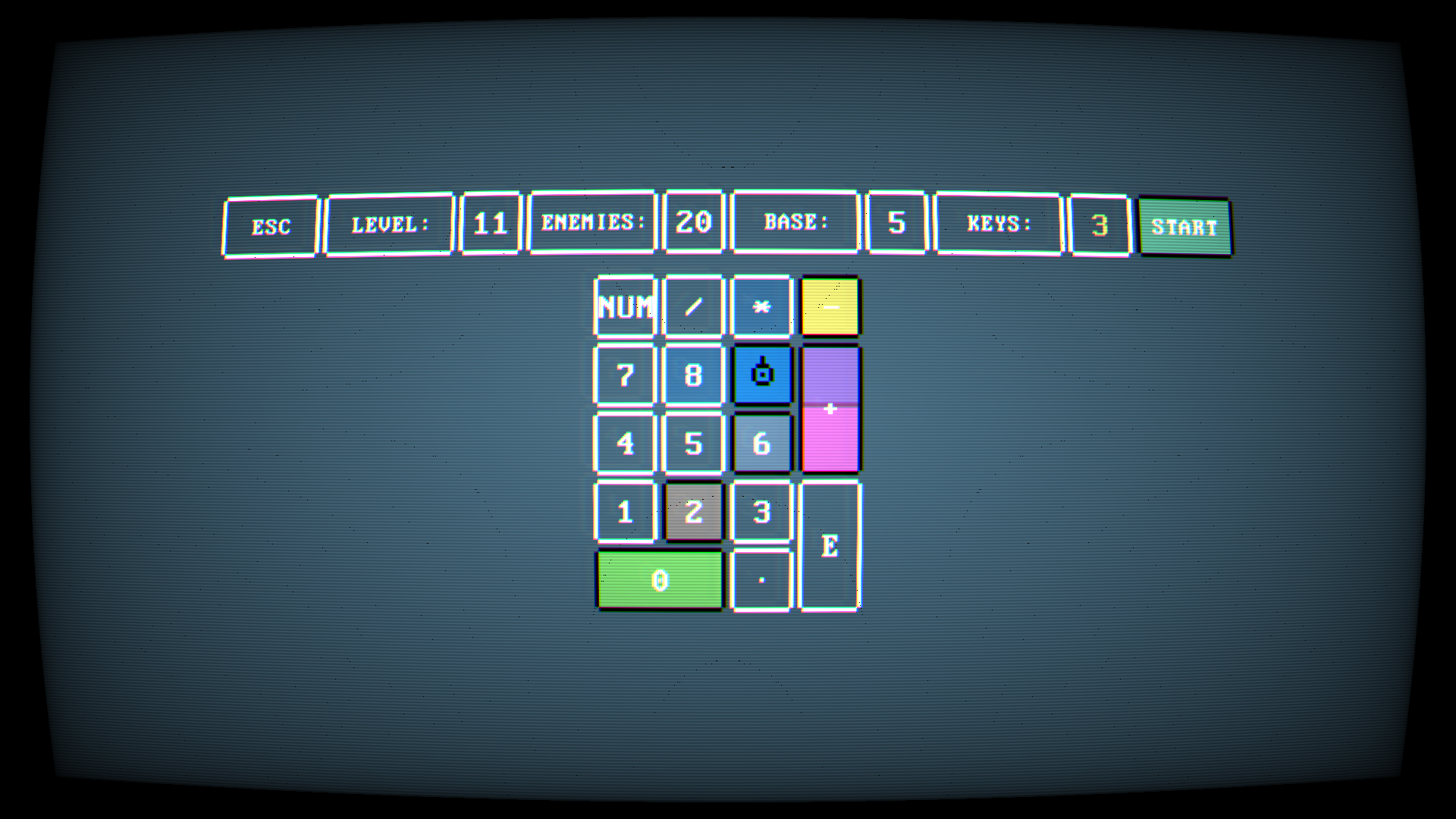 Tower Defence, but you can't place any towers. Instead you control were the path will be.